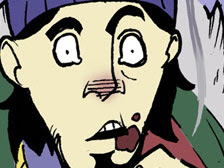 Marked is a September Zuda comic done by Fernando Pinto. Here is the synopsis: “Marked” is the story of Evan Dark, a man who loves his job. You see, thanks to the tattoos on his hands, he is able to destroy demons, trolls and various horrendous creatures of the netherworld, armed only with his fists. He’s one of the few “Marked men”; men who protect the world from the demon population which is trying to take over our realm. He received these tattoos by mistake (when the person, who had trained all of his life to be the next receiver was, apparently, ”less than prepared” for the task). With this, he landed a job working for “Blake, Stanton, and Bob”, the company that takes care of the human interests in the war between humans and demons. A war that, regular people (like you and I), are completely unaware of. It’s a great job, but there is one catch. You see, the problem in Evan’s life now is that there seems to be a demon rising (according to the sacred scriptures), so demons are appearing more frequently in our earthly plain. This means that working hours are getting more and more insane. Evan is trying to balance it all, while in a relationship the lovely Melissa Carlile, who thinks he’s just a regular accountant. So join Evan, as he punches his way through rooms full of creatures of the night, and tries to make it back home in time, for dinner with the love of his life.

Kind of like Buffy The Vampire Slayer, only it's a dude who destroys demons
The story of a hero who gets imbued with powers to go out and fight whatever evils lurking is a far older set-up than Buffy, and Marked does an excellent job of pulling it off. The art is a little cartoony, but the pace/writing is a great fit for Zuda. It helps a lot Evan is fighting some very coolly designed demons, in fluid action scenes. When it starts Evan has already gotten his powers (visible in the form of some cool 'Celtic cross' style tattoos on his hands), and is more worried about missing dinner with his girlfriend than the upcoming demon battle. That shows a early humor element, but also Evan is either accomplished, or overconfident in his demon fighting abilities. The script of the comic was filled with well done dialogue, and ending each screen on a high point that would make you want to continue reading. The demon design is awesome, purple skin, red eyes, and plenty of teeth. Readers don't get to see the fight continued because the story then switches to a flashback/origin story 3 years in the past. We see how Evan was like before he got his powers in a amusing exchange with one of his friends. The characterization here, and the compare/contrast to how he will become made for some great writing. I hope the plan is to continue having flashbacks to Evan's past, as readers also follow along in the present, it really hooks you as a reader. He has just lost his job because of backing over his bosses wife. He goes outside to take a leak in a alley, and crosses paths with the former holder of the special tattoos. He tells Evan he needs his hands, Evan says he's using them, so the former 'marked' just grabs his hands and that mystical energy starts flowing. It is a funny set-up and it got some laughs from me. Screen 5 shows a brilliant flash of light as the power changes hands (no pun intended), and then the former 'marked' falls with his last words being "Don't fuck it up". That last line was redacted for Zuda audiences of course. Screen 5 had some really nice sound effects which I always enjoy, and ended with a demon appearing behind Evan.

No drag assing around in Marked, Pinto mostly delivers in the 8 screens allotted
I'm not a big humor fan, but the mixing of humor with horror was so well done it made to story stand out. Readers see Evan's first ever battle with a demon, and of course he has his share of problems. A very funny moment was when Evan is grabbed around the face by a demon, and mumbles "Mfdbl pttrdl dsptl!" which translated means: "Dude I was just peeing!" On screen 7 we see the demon about to destroy our hero, along with some very good sound effects used as bridges between panels. The screen also ends with a panel close-up shot of Evan's new magical tattoo. Evan hits him in the face exploding his head, readers see the demon fall dead, and Evans pants slip to reveal some heart patterned boxers. It's one for the books as far as the things that can happen to you once you get your powers. It ends still in the flashback with Evan saying "Dooood", and looking at the now headless demon. The ending is the only thing that kept this comic from getting a favorite from me. I enjoyed the flashback, but it was a hollow ending that didn't connect up with the start of the story. It would have been great if the story could have came full circle by ending with Evan confronting a angry girlfriend back in the present day -even only in one panel. Ending in the flashback wasn't much of a cliffhanger since it's obvious Evan would survive and get better at slaying demons. I was looking forward to seeing the girlfriend back in modern times it would have made a fantastic self contained story. It's still a great read, and a great fit for the Zuda contest.
Posted by RKB at 6:12 PM