Zuda review Mystery Jungle/ I agree with everyone else, only more so 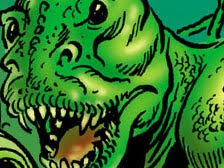 Mystery Jungle is a September Zuda competitor done by Diego Cordoba, which has good art to go along with awful narration. here is the synopsis: The setting is a lost world in a hidden valley down in the jungles of modern-day Borneo, where dinosaurs still live among other creatures. When two foreigners, a man and a girl, crash-land in the jungle they find themselves alone and pitted against all sort of dinosaurs. Thankfully they run into a mysterious bronze-skinned savage who seems to know his way around the jungle. Now, among various saurians, tigers, giant apes, snakes and other vile creatures, they must make their way out of the lost valley and back to "civilization". Along the way they run into some dinosaurs and, barely making out alive, are captured by the Puti-Puta, a tribe of pygmies who feast on... human flesh! One night before they actually end up in the Puti-Puta's stew they are attacked by half-humans riding on pteradodons. However, in the turmoil that ensues, the girl is captured by the riders and taken to the land of TraLaLa, where the pteranodon riders present the captive to their queen, the mysterious black beauty Sheba. Queen Sheba, whom legend says is immortal, actually needs human blood to keep on living, especially the blood from a virgin. Now it's up to the mysterious bronze-skinned warrior and the man he rescued, to find the captured girl, fight the pteranodon half-human riders and confront their evil queen Sheba... But the man that accompanies the bronze-skinned savage has other plans on his own, mainly to look for the hidden treasure of the Loomas, whose location he preciously carries in a map kept hidden inside his clothes. The ordeal through which they must all go will, for once, decide who are the real predators and who are the preys.

One of the worst aspects of comics in the Golden Age shouldn't be repeated in piss yellow text boxes
The colors are fine, art is fantastically pulpy in a Tarzan newspaper strip way, and the letters are easily read in any viewer mode. The problem is with all the yellow boxes of needless narration. In the Golden Age (my favorite period in comics) one big problem was telling readers in text boxes, exactly what you've just shown them in the art. This comic is eat up with that problem all the way through it. Yellow box narration wasn't needed on screen 1, but I took it as a homage to the pulp genre of comics. Screen 2 is when the repetitive show and tell business really starts and it's all down hill from there. Screen 2, Panel 1: "Abruptly a staccato sound breaks through the humid skies...", in the panel you see a plane flying by with a Wwwrrrrr. "The bronze skinned man looks up at the new intruder...", sure enough a bronze skinned man is drawn looking up at the airplane. "These are not people who normally inhabit this jungle, he thinks...", yep the bronze skinned man does have a confused look on his face. Panel 2: "Suddenly a pair of leathery wings hit with all its force the metallic flying machine...", in the panel we see a 'pteranodon' flying into the plane. None of that text was necessary we could see what happened in the art, which would be even better without redundant text boxes taking up panel space. The narration also seemed to switch into first person with the 'metallic flying' bit. On screen 3, panel 2: "losing one of its wings from the impact by the creature, the plane spirals below towards the dense jungle", the art's good enough you can plainly see the plane spiralling without the play by play. With panel 3 we see a nice action shot of the plane crashing through the jungle, which is wrecked by a caption telling us the plane crashed "through the heavy foliage". On screen 4 we see the bronze skinned savage swinging through the jungle in panel 1, and read it in this caption: "The bronze skinned savage swings through the jungle trying to get below and see if they are any survivors". After that we get panel 2 of the two people in the crashed plane, then this caption to start panel 3: "Once they recuperate from the shock of their accident, the two foreigners climb out of the plane..." -you see them standing outside their plane. With today's readers that narration is needless, it would be assumed the crash landed pair got out off panel in between the borders/gutters from panel 2 to panel 3. You'd think once readers got to the T-Rex stand in that would be the cool part, but the big reveal is also accompanied by more narration. On screen 6 we get a nice action shot of the bronzed skinned savage swinging down to fight the monster, and save the poor foreigners. Its dramatic impact is hamstrung thanks to the inane caption: "Suddenly as the creature faces its potential dinner for the day, a bronze skinned figure comes soaring down...". Needless captions messing up the flow of the story, and taking space away from the art continue on screen 7. The comic ends with 'the bronze skinned savage' trying to jump on the monsters back, but he gets thrown. If you want a cliff hanger of impending doom their is a better lay to lay it out than making the hero look like he got thrown off a mechanical bull.
Reading the synopsis first I was hoping for a Tarzan meets exploitative cannibal story
Cannibal exploitation might be too hard a R until Zuda gets that mature content up and running, but the comic needed something else as a hook. I've already read Tarzan (I own some of the old comics), I don't need to read it again. Mystery Jungle needed that something 'different' to make it stand out from the rest of the pack. Considering it's a 'lost world' setting more monsters wouldn't have been a bad idea. My view of this comic would have been much higher without the yellow text boxes. Try this as a experiment: read the comic again, but ignore all the yellow/blue text boxes. It reads far better with just dialogue and sound effects than it does weighted down with narration. A advantage of getting rid of the narration is the creator doesn't put too fine a point on things. More elements of the story are left up to a readers interpretations, and it avoids pointing out the obvious in text. The art is more than fine enough to convey emotions in the characters expressions. Cordoba needs to abandon vestigial storytelling techniques, and have more confidence in his abilities as an artist.
Posted by RKB at 2:08 PM