Zuda review Zamir/ The worse the thumbnail, the better the read 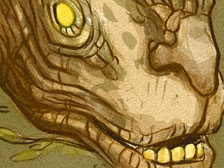 Zamir is another September Zuda comic done by Pablo Zych, it got a fav from me for a nice story with very original art. Here is the synopsis: The main character Zamir –chieftain of Polan’s tribe, searches for his missing son. He arrives at the Holy Forest, where he encounters a Witch. She tells him that the hostile Wislan tribe kidnapped his son. They want to make an offering of the boy to Weles, the God of Darkness. Will Zamir and the Witch reach Wislan? What and who will stand in their way? Will they survive?

Some more well drawn monsters, I hope the trend continues this month
The art and dialogue are a perfect fit for a dark fairy tale/fantasy story. The ending could have had more impact as a danger/suspense cliffhanger instead of a 'going off on a quest', but still a very well done story. The art style has a little of that 'story book' feel and with the colors definitely stands out on Zuda. It starts off in a magical forest with Zamir surrounded by some flying baby zombies, and a Pan character hanging out in the background. the Pan character is also hanging out in the background of the last panel so maybe it will show-up again. if your doing a dark forest fantasy story interlude you need to be able to draw some scary trees, which Pablo does. Upon being accosted by the flying baby zombies (of unbaptized children) Zamir starts cutting their heads off to get past them. Then some nature spirit/demonically possessed tree tells him to "leave the holy forest" -I appreciate ironic dialogue. This comic has square word balloons but it fits the story, and lettering is easy to read. With Zamir throwing around words like fray, that dialogue sounded like it's trying too hard to sound old/odd. For most of the comic though (especially the witches scrying/warnings) the dialogue is very well done. The confrontation with tree demon was handled very well. Zamir bowed his head, was appropriately respectful, and got knocked on his ass for the trouble. Zamir tries to ride the forest demon like a bull, telling it he must find the witch. Proving the old adage 'there ain't no cowboy can't be throwed' Zamir is sent flying head first into a tree and knocked unconscious. Zamir's flying through the air was some well done sequential art.

Waking up to the rat creature was almost a film noir style effect
On screen 5 Zamir waking up was conveyed by a giant rat creature coming into focus, taking the space to spend two panels on this was a excellent narrative choice. The witch is dismissive of her creatures warnings, and the screen ends with Zamir running his knife through it's skull. I really like the different narrative choices used in this comic, the different shots used to tell the story. In panel 1 on screen 6 Zamir and the witch are only shown from their ankles down. This was a chance to spot light the witch's mangy cat, and prolong the suspense till you get to screen 2. This is the screen we also find out Zamir is immune to magic, and he plans to use the witch's second sight to find his missing son. No doubt the 'being immune to magic' bit, which helped him out in these 8 screens, will also come up again. The witch does her thing and divines Zamir's son is to be sacrificed to the evil god Weles. Zamir threatens the witch to get her to go along with him, and as they leave out to rescue the child, you can see Pan up in a tree. The geography and backgrounds were gnarled enough to really fit the mood for the story. Their would have been more drama if the story had ended earlier with the confrontation with the witch, before they rode off into the sunset, but it still stood apart from most everything else on Zuda.
Posted by RKB at 9:38 PM