Spaghetti Strap Western review/ If your going to do a western you need to be able to draw guns, action scenes, and er... horses 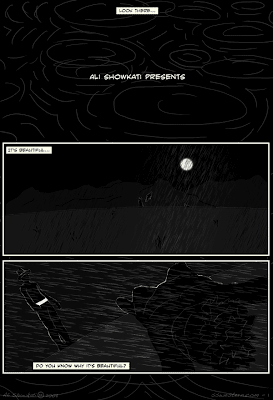 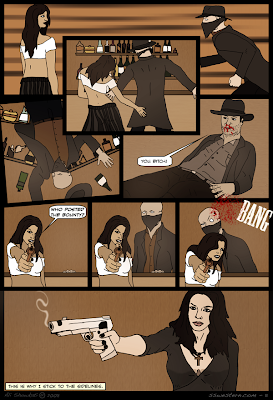 Spaghetti Strap Western is a comic done by Ali Showkati that updates on Wednesdays it is the first of my random azz reviews. It's a western set in the future (in the year 2152...), that still has flesh and blood horses in it. The horses and six-shooters are not terribly well drawn, and the action scenes are beyond lacking. Have you ever read the first few pages of -anything- and thought: this is awesome!!! Then as you endeavor to read on things went more, and more down hill? I have no idea how long SSW is supposed to last, but over 6o screens in, the entertainment level is going down to less than nothing. What was a moody, dark, and enjoyable beginning turned quickly into a predictable story that doesn't even fulfill genre obligations.

An art style reminiscent of King of the Hill doesn't work well for fight scenes
So basically their are two women named Cassandra, one (Cassie) is wanted by the oppressive dystopian wasteland future power structure, the other (Cass) is a literal whore who quite the job a year ago. Is she was still 'working' it would be less cliched, but she quite for mysterious reasons/ future developing plot point. After all these types of stories, it would be a nice change if characters were just what they appeared to be. Do to a case of mistaken identity various bounty hunters go after Cass, who fights them off (more on that later) and takes Cassie under her wing. The title of the comic comes from the lose fitting genre label, and the Cassandra's clingy articles of clothing. Perky cartoon nipple action doesn't do it for me -alas. The comic s is done with Comic press, the site also has character profiles, creator blog, etc; The letters are easy to read, and the colors are negatively affected by someone playing with two many tools in their tool box. Luna brothers might be a influence on Ali's art, but he doesn't pull it off. The dialogue is the worst of all possible worlds. It's not 'hard' enough to be funny in spite of its self. It's not crafted well enough to sound remotely real. It's a lot of philosophizing, and profanity that goes together very poorly. What if Michael Moore, and Garth Ennis were co-writers on a comic strip -but really wanted to do a movie? Reading those word balloons I could just imagine some C level actresses over enunciating that dialogue, as must as Ali over wrote it. 60 screens, a ton of dialogue you'd think their would be more exposition than what you get. Instead it's the two main characters having the same conversation over, and over, and over again. The web is infinite, a reader's patience isn't. It says in the creators bio this is a adapted for comics film concept. That's your problem right there! Comics are not movies even if they share elements of style. A reader can all most hear the mental gears clicking: x number of pages of dialogue -time for a action scene! Rinse. Wash. Repeat.
Cassie: It's human nature to wonder about the future. Cass: But is it human nature to fear it?
Yes.
Yes, it is.
It goes on and on like that with the painfully overwrought melodrama. The guns in this futuristic western look like something Rob Liefield drew when he was 5. The horses are Alex Katz tribute style colored globs with a head, and legs -kind of. The real down side to this comic comes from the action scenes. With a artist/writer their is no reason not to go with your strong suit. If your art isn't impressive in a area, then don't have a story that's going to draw upon that. In this western -as in any western- their are a number of action scenes. It looks like paper dolls are fighting the figures are so undynamic and awkward. The classic shootout scenes aren't helped by poorly done guns, and the overused/abused star muzzle flash effect. The are occasional good design elements on the page (especially when using a sky line's condition as a transition to a flashback), but not enough to overcome the rest of the work. People get criticized sometimes for a over reliance on fight scenes, but if action packed confrontation is what you do well go for it. If your art doesn't jump off the page, those page count padding fight scenes are going to turn people away. No new twists, or turns in this comic to take it away from boring predictability. Sometimes you can adept a film script to comics form, but this is one comic that should have stayed a spec script.
Posted by RKB at 9:48 PM