Sin Titulo review/ I have zero percent interest in Lost, so that lessons my enjoyment of this comic 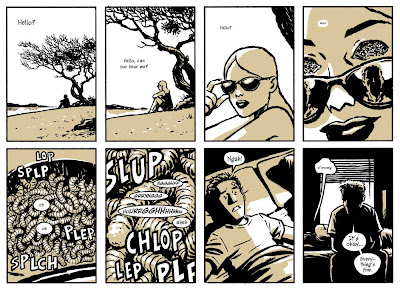 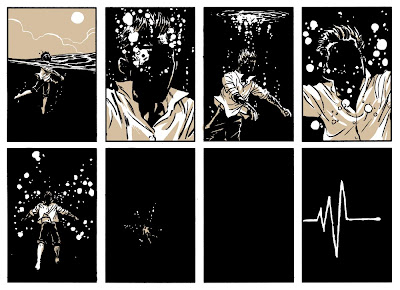 Sin Titulo is a online comic done by comics pro Cameron Stewart. It's done on Comic press and updates every Sunday baring any real world issues. Stewart is a professional comics artist who's dead-tree works I'm familiar with are: The Other Side, and Seven Soldiers: The Manhattan Guardian -which are excellent if you haven't read them yet. It's: A dark, neo-noir semi-autobiographical mystery thriller concerned with dreams, family, and memory. A young man named Alex gets dragged into a conspiracy involving: his dead grandfather, a blond woman, a mysterious beach, and a laughing sadist who repeatedly kicks his ass. The art in ST is amazing, fantastic layouts for the screen. Letters are easy to read, and the black/white/tan color scheme fits the comic very well. Repeated story elements is where I start to get critical. I think Stewart does the Hitchcock shuffle/MacGuffin Mamba a little too much with 'the beach'.

The diminishing returns of repetitive scenes
The beach is almost a character in it's own right, but it's my least favorite. The sick-o perv/goon -who seems to squeeze one out while imaging doing bad things to octogenarians- is more interesting, if considerably less likable. As much as 'the beach' is featured that's a problem. In these 'my life got turned upside down by a cabal' stories the amount of impact the drive-by weirdness has is directly related to how mundane our leads life is shown to be before. In Sin Titulo the weird shit is going down by screen 2. Flashback's aren't used to show Alex's mundane world before everything went wrong. Instead they're used to show Alex was a screw-up from a abusive home, and hints about just how whacked out his now dead Grandpa was. If Alex had been having all these 'crazy' beach dreams for awhile, he seems too surprised when things start going bad for him. The beach is this mysterious place part dream/ part memory that touches Alex's life and others. The more you see/hear something the less of a impact it has, which is what happens with 'the beach'. Think of it this way: at one time "Why did the chicken cross the road?" was probably a pretty funny joke, but by the one trillionth time told; it stops being funny. Even with fantastic artwork and disturbing/curious images, 'Beachie' shows up on too many pages to be all that intriguing. Just when things get rolling, and the scene is tense, -Stewart breaks from that cool narrative to go looking for Gidget, or whatever the mystery really is. If we didn't see it so much, I'd be more curious about what the deal was with that patch of sand. There is even a 'Close encounters of the third kind' make a model style tribute to 'the beach'. Then their's that whole 'Lost' story structure thing...

One of my favorite pieces of serial fiction, and one of the indirect influences on Sin Titulo, is the tv series Lost. One of the things that Lost does exceptionally well, and which I am trying to emulate, is to advance the story while continually opening new narrative avenues, and to end each episode with a really exciting cliffhanger that hopefully keeps the audience hooked. -Cameron Stewart

I was wondering what was off about this read until I read that on page 39. I don't think Lost advances much if anything in their going off in all possible plot point directions. I also don't think they have a clue how it's all really going to end. No road map to the words "THE END". I don't ST is that bad off about direction, but all those new narratives just slow things down. We have: Alex and his beach dreams, Alex and the conspiracy, Flashbacks to Alex's childhood, Alex and his girlfriend, the blond girl beach dreams, the blond girl in real life, blond girl as a wife, the artist who's hung up on trees... 80 updates in, but only baby steps have been taken in most of these directions. Some of the most effective sequences in ST are the silent, or damn near silent action scenes. I love the sound effects they get the story telling a major boost. I've never felt the need to read a whole lot of witty back and forth during a fight scene, or a car crash. The dialogue is actually very good for the characters, but the hook has fizzled out for me. The 8 panel grid, is a good idea -it puts more of a focus on the art in the panels. Too many beach scenes, and all the narrative directions make it a choppy as hell read. Everything is professional, because it's done by a professional, but that doesn't mean a story will grab you -and this one didn't.
Posted by RKB at 4:52 AM