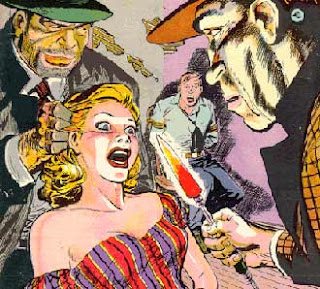 Charles Biro is known as a comic book artist, writer, editor. He started out drawing (and maybe writing) Steel Sterling for Zip comics. He created Airboy for Hillman. At Lev Gleason he was mainly a cover artist (after DareDevil battles Hitler #1), along with being the primary writer and co-editor of their comics line.If you read Ten Cent Plague by David Hajdu you get the impression he had ghost writers/ ghost artists. He was the driving force along with Bob Wood at Lev Gleason comics back in the Golden Age. He revamped The Real DareDevil yet again after Jack Cole pulled the character from the brink and made him even more original. He created The Little Wise Guys as side kicks who eventually took over the entire comic when super heroes went out of fashion. He created Crime Buster for Boy comics. Charles Biro had a pet monkey who sat on his shoulder when he drew. Imagine that visual. People said you could tell what kind of mood he was in, by the way the monkey was acting. Crime Buster got a pet monkey side kick named Squeeks, who was popular enough to have imitators. Biro and Wood also created the crime comic genre with Crime Does Not Pay which spawned a legion of imitators as well.
Maybe.
It's also alleged/charged that George Tuska ghosted covers from him, and a woman named Virginia Hubbell was his ghost writer. The story he told about how he came up with the idea for Crime Does Not Pay: "One night Biro and Wood were sitting in a bar discussing ideas when Biro remembered the time he had been approached by a man who offered him a “indiscreet rendezvous” with a woman. Biro declined. The very next day Charles spotted the man’s picture in the paper...he’d been arrested for kidnapping the woman! He told Wood about the incident and suggested a comic book dealing with gangsters and murderers, real and imagined" [Crimeboss.com] was almost certainly fiction. Was he a great talent, or the first incarnation of Greg Land???

So why did David Hajdu shit all over Charles Biro?
In Hajdu's book Ten Cent Plague Jerry Robinson and Maurice Horn had some good things to say/quotes about my Golden Age idol. Rudy Palis in this book said: "I never saw anything worse than his stuff, really." [I have, maybe he just isn't as well read as me?] Rudy says Biro used a pantograph to replicate images his whole life, including during his comics career. Pete Morisi gives him the most hell, but he does have his own personal grudge so you can't take him at his word. Morisi wanted to use the DareDevil character at Charlton, Lev Gleason had no problem with it, Biro wanted a share of the profits if it became a success. Morisi wasn't down for fortune sharing so he created a stand in Dave Sim style in Pete Cannon...Thunderbolt. Which truth be told is what he should have done in the first place, and was the better for it. He had his own character, now owned (at least in part) by his estate. The pen's a long arm from the grave, and a pissing match between spectres something ghastly. Morisi no doubt felt pissed on that he didn't get DD, so decided to return the favor to Biro. Hajdu weighed in with this comment about Biro's skills as a writer: "He also applied the creative technique he learned as a child: he cheated." This is what David Hajdu had to say about his ghost writer: "As several artists who worked closely with Biro would recall, many if not most of the scripts for which Biro took credit were ghost written by a woman he had met at MLJ, Virginia Hubbell."[Ten Cent Plague] As far as any of the sources for ghost writing go, I have no way of knowing if theirs a cat among them without a dog in the fight.

Never mind Jose Muñoz Keith Giffen drew like George Tuska
Take a issue of Ambush Bug, or a Legion of Superheroes from the late 80's early 90's. I figure every collector should have at least one. Compare the art work of Keith Giffen to the art work of George Tuska found in 2 stories in Crime Does Not Pay #48 just for a example. If your a member you can down load it here. You might not agree, but to my untrained eye Tuska is definitely Giffen's biggest influence before the ink on paper/Trencher days. Biro and Tuska on the other hand don't draw a like. In comic art styles it all comes down to the way people's faces are drawn. That's where you really see their style expressed, just like in real life with people's personalities. Biro's faces have that 'same hand made me look' from Steel in Zip throughout so many of The Lev Gleason covers signed Charles Biro. I thought in my junior detective mood, I was really onto something here. Then I remembered Al Capp switched to drawing his characters heads and hands, and let back ground me like Frazetta do the rest. So it's possible something like this went down, or out and out ghosting. The more damning charge of ghost writing is of course the harder to prove. If Biro did write some of his own stories which ones, and how many? I don't know how much/any of the good, or the bad is true. I do know whoever, however many that wrote, and drew all those stories under the name Charles Biro -I'm a fan of him/her/them.