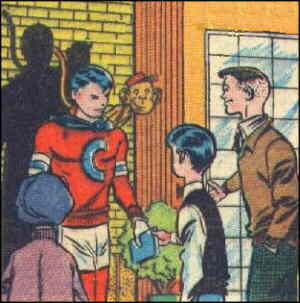 Crime actually paid a fortune/ thank Marx for socialist profit sharing
It will be a damn shame if Charles Biro never gets the collected Fletcher Hanks treatment. It amazes me (and no doubt it does Greg Sadowski) the number of collection's of fantastic Golden Age stories that are available. I'm not just talking about Marvel, DC, and EC's 'sell your first born to afford it' hardbacks. You also have the complete Fletcher Hanks making its way, a collection of Frankenstein stories, various artists, and genres getting the collected treatment. So why no love for Charles Biro? Saying Biro/ a ghost writer did superheroes, and crime comics doesn't cut it. Biro and Bob Wood invented the crime comic genre with publisher Lev Gleason's Crime Does Not Pay. Like the horror and romance genre's for a time later on, it kicked everyone's ass but Superman's and funny animals in sells. Every other company tried to glum on to their success (Lev Gleason even put out a spin-off -Crime and Punishment) including EC with their Crime Patrol which would morph into Tales from the Crypt after another name change along the way. [That's the subject for some other blog post.] Mr. Crime was created as the host of Crime Does Not Pay -possible comic book inspiration for the hosts EC used? I'm guessing yup. How much respect does Biro's Crime Does Not Pay get these day's? The Mammoth Book of Best Crime Comics has 2 or 3 reprints from this title, it's a damn shame it didn't have more. I noticed no author was listed for the Fred Guardineer who dunnit? (this was a common feature in the comic), Charles Biro (whoever that was) wrote those stories but the editors of Mammoth couldn't/wouldn't give the credit. 'The Button' by Bill Everett was either written by Everett, or Biro -but not anonymous. When I saw that was on the contents page my initial verbal reaction was "anonymous my ass" then I flipped off my computer screen. The book is in the mail from Amazon, when I get it I'll see if their is any editorial comment about this. It seems like a pretty obvious snub to me though. A common problem reviewers have with Mammoth is the Spirit story chosen for inclusion is average at best. I have the same problem with a 'who dunnit?' making it in. I love Guardineer's art work, but 'who dunnit' is the least entertaining regular feature in Crime Does Not Pay, and not representative of the whole. The quality of content is there for a solo crime book reprinting just stories from the Lev Gleason published titles that Biro ran. Luckily many of the more stand out stories are available for download/ on-line.

He had the ball's to kill Meatball
My two favorites in the Golden Age are characters Airboy, and THE REAL DareDevil. In Air Fighters comics #2 Biro (or at least someone going by that name) created the Airboy feature. That first story/art was the only work he did on the character, but it set the ground work for an amazing run to come. With DareDevil Charles Biro had the opposite effect. He took over from Jack Cole who had already revamped DD, and went in a different direction. DD was a springboard character to tell whatever kind of story Biro wanted to tell. Usually it had to do with crime, and the crumbling ruins of a damage persons psyche. Fletcher Hanks had his hang-ups one of the most obvious was he had a thing for bodies floating in the air. One of Biro's repeated themes was a bad seed/black sheep betrays his family, and karma treats him like a circus freak does a chicken. Family betrayal happens as much as fighting gangsters, or fighting fascist's for DareDevil in the WW II era. It definitely made for some of DareDevil's best stories. In Daredevil comics # 13 Biro introduced The Little Wise Guys. In issue #15 Biro killed off little wise guy Meatball in a kid gangs story, I doubt many would of had the courage to do. The impact of that on these characters, and the opportunity for some truly impressive artwork, is something more people should take note of. As time went on, and superheroes faded, The Little Wise Guys would take over the book, DareDevil's last appearance being in issue #80. Biro wrote morality tales which didn't feature DD that much, but were still intriguing stories. He wrote those bad seed stories with the kind of murders Wertham tried to save you from. DareDevil fought the Nazis too, and did a damn good job at it. Biro even had DD give up his costume, and become a publisher, it didn't last but made for a interesting story arc.
DareDevil's throwing his trusty boomerang and taking out the bad guys is always a memorable image. DareDevil did most of his crime fighting in the daytime, which only served to make the villains/stories Biro wrote even darker. It's pitch black on some lonely street you can kind of figure the kind of characters Batman will cross paths with. If the evil deeds go down in board daylight, it reinforces the idea bad things can happen to anyone, at anytime. DareDevil was used by Biro as a gateway to a number of different types of genre stories in a 'cries out' to be collected amazing run. Superhero, romance, morality, crime, humor -whatever you go-to genre is you can find it in DareDevil comics.

But wait, theirs more!
Boy comics featuring the young hero Crimebuster who had some of the best villains of the Golden Age. The Joker ain't shit compared to Iron Jaw even by today's even more evil Joker standards. You also had the Rodent who was interesting on a number of levels. He/she was half man/half woman, the kind of character Grant Morrison would piss his pants in delight over because of all the story-telling possibilities. Lastly you have the one-shot villain to end all one-shot villains in Boy comics #19. Their are no words to do this story justice, but I'll try. Bad guy has crippled man killed, then has his own legs cut off to try to collect on a will bequest. No it doesn't end well at all, except for Crimebuster, Squeeks, and the readers of course. Must have been inspiration for the people behind EC later on.

Zip comics features some of Biro's early work on Steel Sterling: doing the art, and maybe writing. It has very nice design elements in the layout of the stories, and Steel has one of the most interesting secret identities around. When not doing the superhero thing Steel pretends to be his non-super powered twin brother. I know you probably think that as a secret identity is limiting. It actually read as more interesting to me than someone wearing glasses, changing their hair style, and acting like a uber-coward to protect their identity.
Charles Biro is an outsider artist!
I wish we could see Charles Biro get the TPB book treatment. 2o pages or less on his history, and the various controversies surrounding him, and the rest of the book dedicated to reprints. [I'd do it for comp copies should anyone from Fantagraphics be reading this. :)] Whatever the 'truth' is someone under the Biro by-line did some amazing work that should be remembered and read. Their is no reason Biro couldn't become a critical darling, and fanboy favorite like Fletcher Hanks with sales to match. The story surrounding 'his' work has as much drama of a different sort than Hanks to be a captivating read. If you call someone a 'outsider artist' they could get away with horrible actions/ or just unpopular ones, but still get great acclaim. Who is Biro??? -could be the title. Who do you go to if you want to pitch a mini-bio/reprint collection idea???

Daredevil Comics:
#13 The Little Wise Guys
#15 meatball dies
#18 new pygmy in Australia origin done by Biro
#23 In a later era it reads like anti-psychologist propaganda
#31 Instead of Cain and Abel, you get a story about Cain and his evil twin
#35 Great superhero type story with DD fighting some weird villains
#39 Another Cain and Abel type story, but with a awesome cover
#48 EC again could have got inspiration from this. Insane doctor tries to do major operation on himself
#49 Another kid gang story, that starts to show DD getting edged out

Crime Does Not Pay:
#22 first issue that started it all
#48 Great artwork/ impressive stories
#52 "The woman who wouldn't die" among others
#57 "The wild spree of the laughing sadist: Herman Duker" among others