Over by Tyler James Review 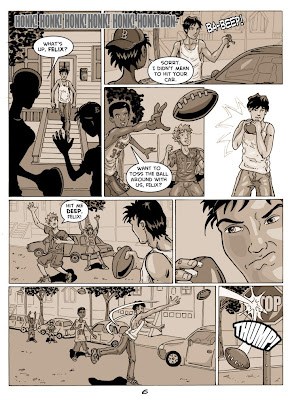 Over is a new comic on the web done by Zuda vet Tyler James that updates on Monday's, Wednesday's and Friday's. It's a romantic comedy about an artist named Felix who is dumped by his girlfriend Faith, and the graphic novel of 'angst' he did as a result. Felix's best 'self denial is a coping mechanism' defense of the book, doesn't necessary win anyone over. He will still have to deal with his publisher/editor Tony wanting those pages already. It begins at the "this is the best thing for both of us" I'm dumping your ass speech we've all given and taken. Felix response is to do a graphic novel about it, which will be a huge hit in sales, win back his girlfriend, and maybe get him a spot on Oprah -in his mind. [Apparently he has no regard for the KFC grilled chicken/A Million Little Pieces Harpo hex.] Some might be concerned that a comic about a comic artist might be too inbred thematically. Actually the 'artist does a story about a artist' is a great hook that provides plenty of chances for 'inside the park' humor. If you have actually had to deal with a editor in real life, an extra layer of story there for you. If not, you can still appreciate dead line pressure and the situations that result from that. I had the chance to take a sneak peak at upcoming events and the story just hums along at a great pace. They're some sight gags, and even more interesting characters coming as we meet more of the cast. We impressed me the most is the excellent dialogue doesn't diminish in quality, and the art continues to serve the story so well. Tyler is the artist and writer so doesn't that go without saying? No it doesn't. Too often solo creators end up working against themselves with the words/pictures, but it's a almost perfect marriage here. I don't like the dog named Stan Lee, but I'll get to that later...

You know what helps a comic more than anything? Everything!
No, that's not a Zen koan. What I mean is I enjoy Tyler's art style it's clean, and easy to follow. It's not a old school Jae Lee chiaroscuro Rorschach test in every panel, and thanks for that. It is very expressive in the characters faces, you can see how fucked up in one way, or another Felix is from page to page. The dialogue and Felix's interactions with the people he knows has some funny lines and real feelings in just the first few pages. What puts Over over the top with me is the color scheme, and the letters. The tonal coloring matches the moments in the story. Getting dumped it's all kinds of shades of blue, the outside world is golden. It's gray, gray, gray for Felix's home life and work. On screen 7 we see the color transition from happy golden outside to Felix's gray to match his mood face. The next screen is gray, back to his combo graphic novel/ self pity wallowing. It's color coded for ease of/increased enjoyment. I have a thing about letters. It's not just picking some typography -it's also how you use them. The balloon panel placement doesn't get in the way of the art. I know some people feel the same way about sound effects, that I do about text boxes. I love a good sound effect though, can't help it. Over is filled with sound effects, that to my minds ear only aid the story. It also provides a important set-up to a kick ass scene I'll be getting to after the bold. On screen 5-6 a car alarm is used for screen transition, and a nice little dramatic moment. If I'm crazy -I'm crazy, but I can 'hear' the sfx: in comics. Maybe I just have a better than decent imagination. The comic also has a number of extra content items. A screen play that goes along with the story, a play list that gives you a hint how pissed Felix is. You get your time's worth from the story, extra's are a cherry on top.

Sometimes you shouldn't listen to the critics -that includes me and everyone else
I agree with Tyler 'the boys' Troy, Matt, and Sootch (along with Tony) are my favorite characters in the story. The 'playing football by a car/we all know how this goes' scene is one of my favorite parts of the story. My next favorite part is Felix's interaction with Tony. I don't know if Hollywood knows this, but it's obvious Tyler does: Romantic comedies have got to have good friend chemistry. In a story like this you expect cool interaction between the ex love interest, and the possible new flame. What puts a story like this above the rest is how good the poor guy, or girl lead interacts with their friends. Previous kick ass writing continues to kick ass. The boys in this story serve as a voice of reason. They make reality real by reminding Felix not to be a [expletive of your choice fill in here], and also the world isn't over, just your relationship is. The comic relief part of it works out well too. Every rom-com needs any number of 'snap out of it man' characters. This story has the boys already, and in a upcoming funny/get your shit together scene with Tony the same feelings are expressed. Only thing I really didn't like is the dog Stan Lee. The name gives me a slight cringe, and I don't like animals in general. Dogs, cats, rats, or bats -it makes no difference to me. I don't know how big a role Stan Lee is going to play in the story, and my view could change -I guess- depending on his hi-jinks. As of now the dog is just kind of there, as a addition to the furniture/ sight gag.

Cool as hell!!!
I give it 5 stars, a fav, and a vot-- Sorry old habits die hard. ;) The best thing for me about the story is the 3-D characters I'm seeing on my flat screen. I have no idea how this story is going to end. Will Felix get Faith back??? I doubt it, but it could happen. Will Gwen become a new love interest for Felix? Will Sootch become a quaterback in the NFL??? Will Tony ever get those pages of 'Fire of the Pendragon'? The fact I care about what happens to all these characters (not just Felix), is proof Tyler did a amazing comic you should be reading.
Posted by RKB at 8:48 PM