THEN CAME ATLAS/SEABOARD Part 4: What have we learned and wrought?

NO NEED TO WORRY, HE'S JUST NOT THAT INTO YOU

Atlas did get the ball rolling on creator rights, higher pay, art work being returned, and exclusive contracts in a Nawyecka Comanche sort of way.  Atlas's agreeing to return art work, and higher pay checks was a necessarily in acquiring talent to work for them. They also promised more creative control which never really materialized. DC felt more threatened by them than Marvel, which is way they instituted there 'exclusive' new company benefits: "Carmine Infantino issued a memo on August 13, 1974 (a mere two months after the opening of the Atlas/Seaboard office) in an obvious attempt to counter the appeal of Goodman's largess and stem the flow of defections. After mentioning a new program of bonus checks, rate increases, return of artwork, and reprint fees, the memo stipulates that the added benefits apply "only to artists, colorists, and writers who are currently working for us and who submit their work exclusively to us... effective with issues scheduled to go on sale during October, 1974" [Jon. B. Cooke, Comic Book Artist #16] The figureheads AKA publishers at Marvel and DC today have said exclusive contracts are a good thing, that foster more ole' school bullpen style competition. I think that's all bullshit and a rising tide lifts all boats. More crossover talent with series going on at the same time between companies leads to more crossover fans who show up for a creator, but hopefully take a interest in the other companies various titles.

"What may have been a 'understanding' way back when between Marvel and DC, became stated Company policy with Atlas on it's talent raids. It got ironically worse when Goodman did the 'make it more like Marvel shift: Steve Mitchell, who had quit DC to work as our art director. When Martin set out to Marvelize Atlas, he ordered me to fire Steve because he wanted someone who would make the books look more like Marvel. There is nothing I regret more in my seven months at Atlas than having gone along with that line of crap. John Albano, who worked with me, sans pay, because Martin wanted a humor magazine. We conceptualized the books and worked out the contents of several issues, only to have the project killed solely because a specific Marvel employee wouldn't come over and handle the title. Never mind that John would have made a great editor. Alas, having spent several years at DC, he was the wrong pedigree." [Jeff Rovin, The Comics Journal #114] So the DC guys they had Goodman decided he didn't want, you may be wondering what could make this even more of a cluster-fuck than it already was? well....

"Marvel was gentlemanly, even gracious about Atlas’s entry into the comics field. The staffers and freelancers were close to Larry, and they genuinely wished him and the company well. There was no reason not to: from a practical standpoint, if Atlas survived, it was another outlet for those who became disgruntled with Marvel or DC. Still, most of the freelancers were happy with what they were doing at Marvel, which was one reason Martin’s “raid” on the bullpen was so spectacularly unsuccessful and humiliating.
DC was another story.
When Carmine was in charge of DC, he tended to be very paternal toward his people. I know, because I’d worked for him. He was very defensive and proud of most of his employees, and gave them a lot of support, creatively.
Our first run-in as competitors was when Atlas began publishing house ads with the phrase “The Atlas Line of SuperStars.” At the time, every one of Carmine’s covers bore the words “The Line of DC Superstars,” and he resented the similarity. That was fair enough, and when DC production chief Sol Harrison called to complain in his blustery but good-natured way, I pulled the ad.
Things got a bit nastier, though, when DC’s freelancers started coming up to see us about work. Everyone from Bob Kanigher to Elliot Maggin to Curt Swan paid us a visit; so did Mike Grell who, as it happened, was a catalyst that brought the flow of DC people to an abrupt end.
When Mike came up to see us, he was worried that if DC found out he’d even been to our offices, he’d get the axe. I told Grell not to worry, that if his work at DC were ever restricted or cut off, we’d keep him busy—and at a higher rate than he was making at the time. Naturally, I assured him I’d keep his visit confidential until he’d had a chance to talk to Carmine and make up his mind about what he wanted to do.
Next thing I knew, Grell was grousing that I’d called Carmine and clucked about how we’d “landed his boy Grell,” thus making the artist’s position at DC extremely uncomfortable. I hadn't made any such call, of course; not only did I scrupulously avoid Carmine—he intimidated the shit out of me —but, in all candor, Grell wasn't a “catch” worth hooting about to Carmine or anyone else. I might have crowed to one or two of my discreet colleagues like Bill Dubay or Ernie Colon if we’d signed Joe Kubert or Jack Kirby. But Mike Grell? Uh-uh. While circumstances at Atlas often left me compromised and/or playing the part of an SOB, betraying confidences has never been one of my bad habits.
To this day, I don’t know how Carmine found out literally within minutes that Grell had come to see us. Most likely someone who was just leaving the office or was in with Larry saw Grell enter and spilled the beans. The comics industry is many things bright and wonderful, but tight-lipped it ain’t. (AT&T could learn something about light-speed communications by tapping into the comics industry grapevine. The most impressive such transmission of data in my experience occurred when Neal Adam’s cover for Iron Jaw #1 was stolen. Neal knew about the theft within 10 minutes of our realizing at the office that it was gone—and while the guy has many extraordinary talents, I don’t believe that ESP is one of them.)
Regardless, the Grell-Atlas imbroglio crystallized Carmine’s view that we were a threat to his family, and it didn't take long for a chilling effect to set in. DC freelancers stopped coming by (with the exception of Mike Fleisher who, to his credit, stood beside us), and Carmine hurriedly mustered an offensive of his own: issuing bonus checks to his creative personnel, upping the rates for most freelancers, instituting a policy of returning artwork to artists and colored silverprints to colorists, and establishing a reprint rate of 25 per cent for writers. The catch: with rare exceptions, these perks applied only to people who worked exclusively for DC.
That last part of the deal pissed me off, not only because free enterprise took it on the chin, but because only a fool would go from DC to Atlas under the circumstances. DC’s “magnanimity” cost us a lot of promising and/or heavyweight freelance talent. In retrospect, though, the friction with DC did enable creators’ rights to take a small step forward and, in light of Atlas’ otherwise spare legacy, I take some delight in that."  [Jeff Rovin, The Comics Journal #114]

Comic book adaptations of films and other works can definitely bring in sells and attention. Dark Horse made it's name by adapting and expanding on licensed characters like Aliens, Predator, etc; Marvel had Star Wars and Conan as successes, and DC put out V and some nice one shots (I treasure my copy of  Alien Nation: The Movie Adaptation and fuck what the critics say ;) ), but they didn't let that distract from the focus on Super-Heroes. Jeff Rovin was ready to put the focus on making something out of licensed characters back in 1974, but Martin Goodman had other ideas. "While I brought together artists and writers, and new characters were created, also endeavored to give the line some name-value in the marketplace by attempting to license some well-known properties. Among these were the pulp heroes the Avenger and the Spider, Godzilla (for a black-and-white comics magazine in which it was giant monsters and not nuclear war that brought about the fall of civilization and a future in which humanity tried to reclaim the world from dinosaurs), and Richard Matheson’s vampiric chiller I Am Legend." [Jeff Rovin, The Comics Journal #114]  I doubt the pulp characters would have been much of a draw -but TV and Movie adaptations... Charlton Heston even sent Jeff Rovin some notes on the Omega Man story, imagine that film adapted by the pre-Third Issue Switch Atlas/Seaboard talent -mad genius!

How this all failed to happen: "Sadly, I was stymied across the board, After we met with Conde Nast’s Paul Booner about the Avenger, DC thundered in and got the rights. The Spider seemed to Martin too overt a red flag to go waving at Marvel’s Spider-Man (even though the two had practically nothing in common), and Martin didn't want to pay Toho’s fee for a Godzilla title (although Walt Simonson did draw a magnificent black-and-white story in which giant monsters Gorgo and Rodan duked it out in Washington D.C.- a spectacular tale that was never published and vanished when Seaboard went under). As for I Am Legend, Martin read Heston’s precis and decided that we should imitate the story rather than buy the rights—hence, the Atlas comic Planet of Vampires. In October, I took one last, hotly argued stab at getting Martin to approve a license when I went after TV’s Kolchak: The Night Stalker. But Martin shot me down because the series was a ratings flop. Which was true, but that didn't alter the fact that the show would still run at least a season, that some 10 million people were aware of the character, and that we could get a license for relatively little money. Alas, Martin failed to be persuaded, and we had to settle for dedicating the first issue of The Cougar to producer Dan Curtis." [Jeff Rovin, The Comics Journal #114]
Which leaves you wondering if Atlas had some fairly big name licensed properties maybe they could have found a foot hold, the way Dark Horse did over a decade later?

I couldn't close out my series on Atlas's history without one last shot at Vicki/Tippy Teen. Well I could but what would be the fun in that? In Jeff Rovin's own words: "Early on, I also implored Chip and Martin to let me buy the T.H.U.N.D.E.R. Agents. In fact, I was so confident they’d go along with a reprint/new-material program that I actually put a 64 page T.H.U.N.D.E.R. Agents book on the schedule. Instead, the Goodmans opted to purchase the rights to Tower’s Tippy Teen title, which we reprinted as Vicki. (I was glad, then, that I hadn't suggested going to Gold Key and taking over Turok, a character which I felt had untapped potential. Had we done so, I do believe that Atlas would have become the new home of Zody, the Mod Rob." [Jeff Rovin, The Comics Journal #114] 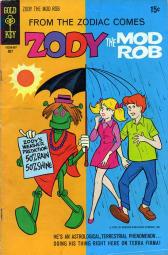 Zody, The Mod Rob as written by Michael Fleisher would have kicked all kinds of ass.