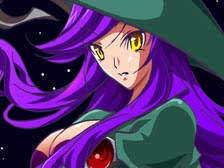 Witch Phase is another Zuda November competitor done by Bryan Golden. here is the synopsis: Nestled deep in space is the vast galaxy of Salem-300. Home to the famous space witches, ethereal women gifted with staggering, powers, who explore the twisted corridors of space at light speed on their inter-dimensional broomsticks. We follow Ailith, a naive, newly awakened witch who has a very blurred, distant past, but attracts attention from the rest of the Space Witches due to her unprecedented magical skills. After learning the basics in controlling her powers and receiving her sacred orbs and broomstick,Ailith traverses from planet to planet, frequently running into other space witches in the pursuit of Artifacts, rare, ancient relics and crystals, from days long gone, which bestow new and unique powers and abilities to their holder. With the help of her trusty, loudmouth, artifact detecting computer M.E.O.W, encounters with mysterious strangers, controlling her newly emerging magical abilities, as well as unraveling her indiscernible past, Ailith sets forth on a grand mission to become the greatest witch in all the universe.
Witch Phase takes the original image of a witch and turns it on it's head as we head into space with Ailith and see how magic and science collide, the witches broomsticks are now inter-dimensional devices which with a spell can transform into a spaceship, and their spells can level a planet, not to mention a witches sidekick, a black cat, is now a highly sophisticated computer program capable of sensing danger and analyzing properties.


Yu-Gi-Oh!, Sailor Moon, and a little Hello Kitty homage mixed in -not my go-to genre

The letters are completely readable, colors are nice, the art work (manga-esque) isn't my thing at all. The story is just a undramatic fight scene with some cartoon cleavage to try to get you to pay attention. The first screen is a full screen shot of Ailith wearing her big pointy hat and holding her broomstick/ sickle out in space. There are only 8 screens to a submission and this first screen just seemed like a waste with a weak looking title logo. Screen 2 is another full screen shot which has Ailith finding planet Fino while looking like the woman in the 'leg chair' on Red Eye. You also see the  M.E.O.W. icon who looks are in line with the Hello Kitty insignia. There is no reason screen 2 couldn't have been screen 1 in this comic, and the creator would have had a extra screen to work with in making the fight scene more interesting. This submission reads a little like the first 8 screens of a 22 page comic just clipped for a Zuda submission, instead of created to fit the format. Screen 3 Ailith uses her powers to uncover some chamber holding artifacts with a faux-manga panel layout on the screen. The dialogue between Ailith and M.E.O.W. isn't bad, but it doesn't grab you as a reader either. Considering the set-up to this comic the interaction between these two characters needs to be as fine tuned and amusing as a classic vaudeville routine. If there was a good buddy relationship established in some sharp banter it could have been that one thing that made this comic more than just a fight scene. Screen 4 Ailith finds the 'Mercure Chrysalis' artifact. One of the habits of the artist is to draw no facial features on Ailith in long shots in a panel. Having the main character go faceless every time it's not a close-up shot is too disconcerting. There was a nice 'blurry finger' effect in the last panel on screen 4 as Ailith reached out to touch the artifact.


Stray attacks my witch, I play Red Knight Barrier to block, your turn. You attack with laser snort, I dodge then play Spinner's thread to attack. Your turn...

The fight scene with the calling out of named maneuver's really does remind you of a CCG. There are some nifty sound effects throughout, on screen 5 that 'Mercure Chrysalis' sends out a beam that unless the Stray. The Stray looks like a cross between a bull with a tiger only a couple of extra eyes, it's decent creature design.  Screen 6 is the start of the "Red Knight Barrier" fight scene with a good panel layout that lends itself to well flowing action. The problem is at no time did the creator make it seem like Ailith was actually in any real danger from the attack. Bryan Golden can draw combat scenes well, but with no real suspense or excitment thinks to the standard genre set-up. Screen 7 is Ailith blasting the Stray with 'Spinner's Thread', while working in some insulting banter. Screen 8 the leggy witch does the Tri Gate Breaker to defeat the Stray, and the comic ends in a close-up on her saying she's going to claim her reward. Calling out the moves Dragon Ball style just turned me off to the whole comic. As far as a Sci-Fi updating of the whole witch mythos -too much bubble gum pop not enough well written humor, or creepy horror with the monster she had to face. If this was adapted into a cartoon on adult swim it would probably find a huge audience, as a comic on Zuda I don't see it going anywhere.
Posted by RKB at 12:47 AM