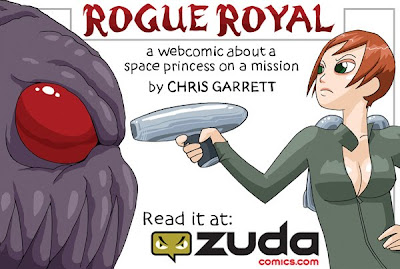 Rogue Royal was a August Zuda contestant done by Chris Garrett. It got a favorite from me and here is the synopsis: What is Ember Zeram, beloved Space Princess of the Palmyrene Galaxy, doing associating with criminals and buying arms from the black market? Why can’t she make her mother, Space Queen Zenobia, happy and marry a nice space prince? Could it be she has taken on some secret mission that threatens to unravel the calm of the entire Intergalactic Empire? Who could she enlist in such a quest? Who will stand in her way? And why don’t they make space suits like they used to? Rogue Royal is a comedic sci-fi action comic with mild sexiness and frequent graphic alien dismemberment.

Mild sexiness meaning cute cartoon princess in a tattered and torn outfit
I'm not a big humor fan (not my go-to genre), but this story is funny. It's a done-in-one self contained tale that manages to be smart, zanny, and set-up then execute the punch line of the story. The colors match the light-hearted story and the letters are easy to read. The art is cartoony, but fun showing some nice alien designs. On screen one we see Ember talking to a alien with one eye on a stalk he can't keep off her cleavage. She puts a unwelcomed kink in his stalk along with a well written humorous little rant. Cute but not sickeningly so accurately describes the design of every single character in this story. A fine job on the part of the creator, with dialogue that matches the quality of the art. I really appreciate that this a story with a beginning, middle, and a end, especially that the alien menace arrives by screen two -no wasted screens. Screen 3 is one of the best screens in the comic with various cute little aliens getting ripped to shreds. Even more smart dialogue from the arms seller "10 percent off anything you see! Provided you use it to defend my station. no discount on Ammo." It comes off as a cross between a black market arms dealer, and a used car salesman. During the haggling you find out Ember's mother the Queen had used her influence to try to limit her daughters choice in arms. Their is also a nice recurring sight gag of bloody body parts flying around all over the place. The action scenes flow well with dynamic rendering in the art. The various sound effects for laser guns and laser blades was a high-light in this comic.

They shot their babies at her??? LOL
In a absurdest bit of humor the 'evil' Hideon mother critter shot flying pods of its 'babies' at Ember. Who proceeded to take them out in a well drawn action sequence. As the babies efforts failed a mother's love was lessened. it went from "Get her my precious little ones" to "oh you worthless wretches" with the papa Hideon saying "Hey did you shoot our babies at her?" Readers get another good action sequence as Ember blasts away at the Hideons. The coloring/lettering worked together, and helped make the fight scenes even more impressive. Ember saves the day by stuffing a grenade done a baby Hideon's throat and kicking it out a space lock. The other Hideons chase after with comments of "mmm! roast baby!" and "Outta my way!" It's so out there it's funny, and dead baby alien jokes are far more acceptable than any other kind. It ends with Ember's suit basically destroyed and a butt shot from Ember. "Now which one of you sold me this @#?!! spacesuit?" One more great laugh before the comic comes to an end. It was a well crafted story that fit the 8 screens allowed on Zuda. It had a respectable finish in the contest at 4th, and I'd like to see more work from this creator.
Posted by RKB at 5:09 PM