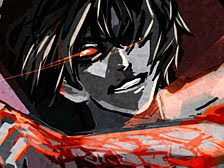 Cards Kill was a August Zuda contestant done by Jason Chiu & Leah Liu. here is the synopsis: Kain Havoc is an ordinary clerk in a big company. He is so ordinary that people even forget his existence. He hates his job and feels inferior. He wants to change, but he doesn’t know how. One day, while playing cards, weird things start to happen. A card changes his life, and he receives special powers. Stronger and speedier now, sometimes he can’t control his consciousness. Kain doesn’t full understand what happened. Later on, he gets involved in a series of events, and finds out that he is not alone. He meets new friends, who have special powers just like him. During their adventures, Kain Havoc learns how to control his power and how to be a hero.
The colors and the art are what stand out to me
I admit Manga style isn't a area of comics that familiar to me, but I'm always game for a decent story. Cards Kill starts off in its opening screen featuring some type of demon creatures. The art and colors are the strong suit of this comic, which you really start to notice on screen 2. The joker look-a-like sends down magical cards to humanity that gives them powers this premise is nicely summed up by the second screen. The story isn't good, or bad just average with a let down for a cliff hanger ending. The letters are only fair pretty hard to read in small screen even post beta. Kain the lead hero gets a nice quite introduction, but from the pace of the story you'd think the creators were unaware they only had 8 screens. This could have been adapted for the format, but things need to get moving faster than this. Really well colored pretty art was only enough to get this comic a 10th place finish. Very nice colors and art on screens 4 and 5 made a Poker game beautiful to look at even if it did take up too much space. I also enjoyed the screen layouts through most of the 8 screens. The problem is with a name like Kain Havoc no way could he ever be a ordinary man. The other problem is it takes too long to get to the big reveal. The was a nice establishing shot to start off screen 6 and help establish time had passed. I also have to give the writer credit for not getting too wordy and letting the art speak for itself.

Screen 7 and 8 should have been screen 3 and 4
Which reinforces the point of their being too much fluff at the start of the story. The light weight 'oh I have powers now' wasn't much of a cliff hanger to end on considering other Zuda contestants. Screen 7 was some impressive panel layouts, very well done reveal of Havoc getting his powers. So why in the hell couldn't we have gotten to this sooner? All that pretty, but screen consuming build-up the creators thought readers needed -wrong it was needless. It also left the only option to end on being Havoc just getting his powers. "better than ever" is Havoc comment as he turns over the card table with a red light glow in his eyes and a Sunspot like complexion. The for the last panel we get yet another establishing shot -with crows. The fact that more crows were showing up (prelude to a Birds style situation) wasn't really that spooky, or interesting here. Forget setting the mood and go with a impact shot of this story's lead. Something more impressive than a table flipping would be called for. The art/colors were amazing, letters blah, writing was decent, but the pace of the story didn't fit the Zuda 8 screens format.
Posted by RKB at 5:14 PM