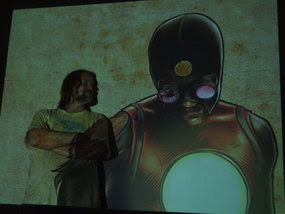 Zuda 52 is a new blog feature that may or may not live past this post. Basically it's about what I hope to see from the next 52 screens of the latest winner of the contest. With Deadly by James Fosdike which I voted for it's pretty much a repeat of my early post about this comic, along with some general comments on the controversy which seems to envelope at least one comments section every month. My major complaint about the comic is still the same more panels per screen and better formatting to cut down on the blank black void. I have no doubt Fozzie will add to the panel count, and continue to kick ass with this comic. You often wonder when your reading the 8 screen pitch what comes next? The Foz had a very engrossing set-up apoco-wasteland genre, while it being set in Australia gives it a nice mysterious/foreign cache to readers in the States. I think from his comments the story is only going to build with the word count, and as the weeks go by the art will only become more impressive.

You have to be awed by the get out the vote campaign for both this comic and Children of Armegeddon. Of course at least one comic a month gets caught in a mini-fire storm, last month Deadly through no fault of its own also got that distinction. Their seem to be two worries in the main: 1. creators (and friends) voting more than once for a comic 2. Just how/who counts the votes anyway? I trust the Zuda folks more than some, so I have confidence they would catch any vote fraud done against the site. I also trust them to go by their secret formula whatever that may be in figuring out who a winner is.

Could the Wizard of OZ please show us some ankle

[no reference intended to the land down under] What I mean is I get for any number of reasons the Zuda folks don't want to make the vote counts public. I say keep standing behind the green curtain (not a green door hopefully), but just give us a peak inside maybe.The problem I have is I think the number of votes should decide the contest flat out. Never mind adding in stars/favs/number of comments/views and going through all the metrics -unless you need to go in search of a tie breaker. Keep things as simple as possible is generally the best way to go in any voting situation.
The legalease on the sight doesn't really let the light shine in, American English or everybody else's English with all those extra letters would be more helpful. I know legal probably insists it has to be worded just so, but goggle translate doesn't work on lawyer speak yet. I wish I knew it was just votes deciding this unless their is a tie, but their is going to be a veil around the voting process I think people will just need to deal with in one manner, or another. I don't blame the folks who are more dubious than I am either, everyone needs someone to hold their feet to the fire.

Talking about the feedback button here people. If you have any questions/concerns about view counts/ vote counts/ general Zuda questions/ concerns about the appropriateness of a post -click on a feedback button. In the early days some thought the Zuda Illuminati didn't even read those things. All this time after the start, I've had any number of responses from the Zuda folks to my feedback. You don't always get the answers your looking for, but it means something to know that do pay some attention to what fans are thinking/questioning. Before we go acting like Hercule Poirot in the big final denouncement scene in the comments section of someone else's comic, try the feedback button first.

Or however it goes, looking forward to Deadly going live Foz.
Posted by RKB at 11:53 PM