Dave Sim is again selling Cerebus head sketches (ball point pen on Aardvark-Vanaheim stationary) on E-Bay. The sketches can be just of Cerebus, or have him decked out as the character of your choice. The price is $25.00 U.S. and it's the second time these types of sketches have gone on sale. I found out about the offer from watching Cerebus TV -new episodes come on Friday's at 9:00 central time.  The current episode is a memoriam to the late, great, Dick Giordano, and Dave Sim talking about his Ditkomania cover (also on sale) featuring Steve Ditko's Miss Eerie. I enjoy the Cerebus TV episodes a lot, plenty of interesting comics history gets covered, and you should really check it out. The first Cerebus head sketch I got is: 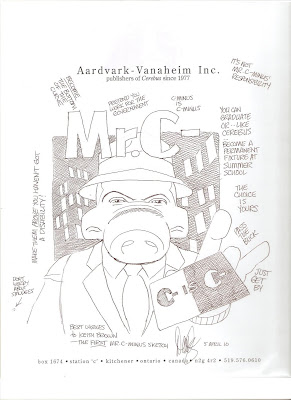 The above (forgive my poor scanning) is Dave Sim drawing Cerebus as Steve Ditko's Mr. A, which becomes Mr. C-! I'm a big fan of Mr. A and Steve Ditko's most recent work so no surprise that was my request. I'm thrilled with my sketch, really enjoyed the funny spin on Mr. A, and wanted the chance to get a few more. No way do I have the cash to fight it out in a art auction, so this is the next best thing. Lucky for me, by popular demand, the sketch offer was brought back I already put in my new order for Cerebus drawn as Judge Dredd, and Cerebus drawn as the Green Hornet. Eclipso (the 60s' version or the one from his own series), or Nukla were the other options I considered.

If your a fan of Dave Sim's work you still have about a day to purchase a sketch. If you do, you won't be disappointed.
Posted by RKB at 7:47 PM