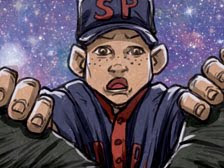 Snipe Hunting is another March Zuda comic done by Ian Williams (Mookie Blaylock) and returning Zuda vet JM Ringuet. Here is the synopsis: Snipe Hunting is an Americanized imagining of the infamous Dytalov Pass Incident. After a group of campers are mysteriously found dead, the "haunted" woods surrounding the coastal New England town of Narranghassett are teeming with paranormal investigators, FBI agents, and curious locals - each confident of the underlying cause of the deaths (Aliens, Terrorists, Jesus, Indian Curses...etc). The longer they search for clues in the woods to support their individual theories, the further they descend into the depths of paranoia, hallucinations, and intense mania. Will one theory be proven correct, or is everyone caught in a violent game of snipe hunting?

It's all right to be left holding the bag, just as long as you don't let the cat out of it.  Using the snipe hunting tradition/metaphor and mixing in some real life weirdness with the Dyatlov Pass Incident is a great start to build a story from.  The story starts off with paperboy Malcolm noticing the headlines talking about mysterious deaths blamed on a compelling force. When then see a benched Malcolm thanks to a coach that either hates him, or is crazy enough to worry about blowing a 18-0 lead in the sixth inning of a little league baseball game. I'm beating on hatred. Screen 2 is also the screen where you get a cuts of pork image in one of the panels, and a inclination Malcolm might not be right in the head. Later, he sneaks out of his house and leaves a 'dear dad' letter that talks about baseball being a red blooded sport  and no pink tea. 3 screens in and the story is already getting creepy as hell, which is a good sign in Sci-fi/horror story. It's start's getting surreal on screen 4 where Malcolm stumbles across two-headed men, evil looking clowns, and pumpkin-heads playing baseball, with a baseball that has a face. Malcolm is the star player in the game -of course- and wants to celebrate, which leads the characters he's playing with to make a dark turn and bring forth the horror element. Their appearances change into more gruesome characters  and 'they' go on a bloody rampage killing a UFO believer, while Malcolm sobs and hits his inhaler. Screen 8 is a full screen shot that shows a demonic crazy looking Malcolm covered in blood, with the corpse of the UFO believer beside him, and a image of the Dytalov Pass map behind him in the art. The text on screen 8 "since honest men are in the slime" accompanying the shot of Malcolm on his knees in a puddle of blood makes you think maybe the kid isn't a crazy/possessed/mind controlled killer after all. Along the way the possibility of a Indian curse causing the deaths is also worked into the story.

All the slaughterhouse imagery conjured up by the words and shown in the pictures will have you wondering what does the other white meat have to do with it? The ending sequence over the last few screens could be too revealing depending on how the story plays out, if future twists are reminiscent of High Tension, or Blair Witch Project 2. It could also be too much mystery if readers try to follow the clues and the story resolution doesn't match-up. Then again the ending could be left wide open enough that any or all of the above synopsis suspects could be responsible. The story is really a Sci-Fi/horror mystery, all the clues need to add up on the last screen no 'deus ex machina' endings need apply. The 'butcher boy' mind-set Malcolm seems to be operating with is either a red herring, red flag, or a little bit of both.  The 8 screens here really set expectations high, but with all the interlocking mystery over what's going on, I'm expecting one hell of a payoff should Snipe Hunting carry on. Regardless of future directions, the 8 screens of various possibilities for whats really going on come together for this submission. I'd particularly like to see more with the locals -maybe- the ones who think it was Jesus, or terrorists.

The writing delivers on the 'freaky shit going down' vibe I'm sure the creators were going for. JM Ringuet is an artist who does excellent work and the excellence continues here. Readers do have to pay attention to catch everything going on in the art, even then it's no sure thing you caught everything. A 8 screen submission with a high re-readability factor -genius! The colors fit the comic well, and all lettering is completely readable. Concerns about how it all plays out aside, It's a great start to a mystery I would enjoy reading on Zuda.
Posted by RKB at 11:39 PM