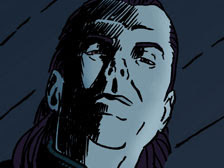 Aleksander Christov: Assassin is another March Zuda contestant currently ranked first place done by J9Naimoli and kenfrederick. Here is the synopsis: This is the story of a boy named Aleksander, who was raised by an abusive and alcoholic father, in Moratovo, Russia, during the cold war era. When Aleksander is faced with a decision of survival, he is launched into the biggest fight of his life – one that leads him to Leningrad and propels him from boyhood to the life of a skilled mercenary for the KGB’s Department 13, dealing in “wet affairs” such as spying, kidnapping and assassination. It is in this organization that Aleksander's every kill, or decision not to, unknowingly impacts the events of the cold war itself.

The last line of that synopsis portends a bit of  'Forrest Gump style' choice seat for history story-telling. It could make for some sweet narrative twists and turns seeing Aleksander Christov unintended, or intended consequences. Hindsight being 20/20 there are any number of opportunities to work the lead character into the history of the Cold War. The historic aspects of this story is a draw to me because I'm such a history fan. The reason being back in my grade school days it was one of a few classes I was a lock for top marks. I have a appreciation for it only a report card payout of $10.00 an A  in my tween years could instill. Should Aleksander Christov: Assassin hold on for a win integrating real world history is one of the draws to keep me coming back for further updates. I hope this comic doesn't rewrite actual history for it's own world, beyond the possibly obligatory who was that masked man on the grassy knoll scene.

Enough about future possibilities, the 8 screens themselves had a surprising 'slice of life' quality to them considering the title implied action/adventure genre. This is owed to some fantastic art, scripting, and colors that fit the story. Letters being legible always a plus on Zuda. With the right amount of research, or actual Russian roots, it would be a fascinating story just to see a 'hard knock life' kid growing up in the U.S.S.R. Add on the promise of KGB skulduggery suspense this could be one of the more impressive titles to win a Zuda contest recently.

The 8 screen introduction to Aleksander shows readers a young teen having to hunt for food, and dealing with an abusive father. It lays all the groundwork for the ironies of life to be introduced later. His father taught him how to kill, wanted to be in the KGB, and ends up dead after a confrontation over a gun in the last screens. Text box thought balloons generally irk the hell out of me, but the ones here were well written, and not too lengthy. The realistic portrayal of domestic booze fueled violence was more griping than many Zuda offerings, right down to young Aleksander trying to escape out of a window, but being unable to. I once wrote in a review "if your going to do a western comic, you need to know how to draw a horse" so I appreciated the well drawn animals in the hunting part of this. The screen layouts don't do anything flashy, but they do tell the story in a straight forward way any reader will enjoy. A classic cliff hanger ending that leaves readers wanting to know what happens next, means it's no surprise this comic is fighting it out for the win.
Posted by RKB at 4:47 AM