Zuda Review NewBot/ Simplicity in storytelling is a virtue 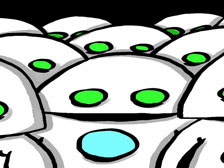 NewBot was created by Chuck Harrison and finished 2nd in January at Zuda. Here is the synopsis: A new world waits for a small integrated circuit. Superficial visions appear as our NewBot realizes that it’s not alone. There are more. Blockades are breached as communication is achieved. Obstacles materialize in our electronic heroes path. NewBot is a comic on the subject of the creation of a tiny integrated circuit with a metallic exterior and lustrous green eyes. NewBot is a narrative about how something new perceives the world around it. Binary is the only language used. 01010110100010101000101000110101

I was tempted to do this whole review in binary, but I figured that would be madding. The most important thing I got from this comic -besides the awesome robots- was how charming straight forward storytelling can be. The robots speaking in binary was a nice touch, equal parts cool and cute, but for the most part this is a silent comic. Silent comics are harder to do than works with dialogue, whatever story you want to tell has to be easily readable in the art, so any reader can figure whats being said. There is bound to be variations, but a general consensus on what's going down needs to be attainable. Here a new little robot is created, his creator introduces him to his brother robots, the inventor gets too happy/excited and has a heart attack then dies. The other robots are confused about what happened, start to gather around, and ask the NewBot, who tells them their inventor is gone. The old bot's blame NewBot, their eyes turn read, and as the comic ends NewBot seems to be facing a angry mob that irrationally blames them for their creators demise. You can  take the story a number of ways depending on your point of view. It can be just a cute little robot facing a hostile world you empathize with, or you can get more serious and see this story as a example of the dangers of a angry mindless mob, unjust persecution, and scapegoating justification. The secret of success of this silent story is the basic plot can be followed, but each reader is going to project their own feelings and experiences onto the lead character. It doesn't just 'work' on any number of levels it works on each individual readers level. If you've ever in  your life felt singled out as the fall guy, you can root for NewBot. If you like cute little characters trying to make their way in the big bad world, you can root for NewBot. It's a robot so anyone and everyone can identify and cheer him on.


SIMPLICITY AS A ILLUSION
It's never as easy as it looks, every panel, and the composition there of matters. The only color in this comic is the eyes of the robots and their chest plates. Which  came in handy in the depiction of the robots anger later on in the screens, even at the start strong narrative decisions were made. These robots creator's face wasn't seen till screen 3 which was a nice split between NewBot's P.O.V. and the inventor's. You also see physical comedy as NewBot shakes with fear as it is first picked up and doesn't understand what is going on. NewBot's surprise is shown when it is presented before the rest of the robots. NewBot's 'Hi everybody' meeting of the rest of the brood can't help but remind you of the first day of kindergarten when kids begin their school attending odyssey. When the inventor first starts to have chest pains (and presumably drops dead)  it's a surprise considering the tenor of the previous pages. Things go from light and fluffy to deadly serious -but the cute art work remains. To do something like that without it being a glaring juxtaposition takes story-telling skills that deserves even more appreciation than a second place finish. By the end of the 8 screens Chuck had got me to care what happens to NewBot next, especially as it is a well done cliffhanger danger ending . Having readers wanting to see what happens next is the most important quality a Zuda creator can hope for, so that even if a competitor doesn't win the contest readers will still want to see the title live on.
If you haven't already checked out the strip, give it a read and see if you don't want to cheer the little robot on!
Posted by RKB at 9:22 PM