Zuda review Doc Monster/ With the word 'Doc' in the title, you know it's going to be action packed! 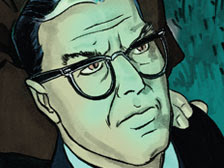 Doc Monster is another October Zuda comic done by David Flora that got a favorite from me. Here is the synopsis: In 1954, reports flood in of mysterious lights and strange airships that appear and disappear without a trace, sometimes taking animals or people with them! Suspecting some form of advanced, Russian spy initiative, the CIA’s “Counter Insurgency Unit” enlists the aid of super-scientist DOC MONSTER to help. A man of mystery, built like a linebacker with a genius IQ, Doc is tasked with uncovering and capturing the suspected communist vehicle behind the sightings. He is assigned an Agency “keeper” by the name of Carson Clay, whose job is to facilitate any needs Doc Monster may have during the investigation… and to keep an eye on him at all times. With his career as well as his marriage on the rocks, Clay grumblingly follows Doc Monster across the country until one terrifying night when all of Carson’s doubts and concerns are torn away, and the unbelievable truth of the UFO sightings come to surface. They are real. They are here. And their alien power comes to bear down on the free world. As their sinister goals are revealed, the nation cries out for Doc Monster to save them. The question is… will he?

The color scheme is what Warren magazines would have looked like with color added. A lot of text boxes to read through early, but the narrative is fairly interesting. The lettering is completely legible. The art does a great job of invoking the right mood for the comic, not a surprise if you've read his other work, and the story pace fits Zuda. The first screen starts out at a drive-in showing Creature from the Black Lagoon in Flemingsburg, Kentucky in 1954. The art is great at pulling off a pulp look, and meeting the titular character on screen 1 is a plus. I noticed the Rip Kirby look of Doc, having him smoking a pipe was a nice touch. There is a little problem some comics have when they have a text box announcing time/location, and you read the comic and from the art it could well be taking place in the here and now.  The drive-in opening, the classic cars, smoking a freaking pipe, all remind readers this isn't some hybrid of the present day. The searching for 'commies' and flaying saucer craze that really did happen make the point there is a reason the story was set in this time -besides just drawing cool stuff. The worrisome thing about Doc Monster is his red eyes, Clay even 'thinks' about it calling it to readers attention. I hope the red eyes has more to do with a X The Man with X-ray Eyes type of deal than some sort of Faustian bargain. Whatever the score I'm intrigued and wouldn't mind if it's one of those things never 'explained' and just left up to readers. When I write about a comic having a good Zuda pace, I mean the shit starts to GO DOWN in the initial 8 screens, and not the 'somewhat later on' ether should a comic win. On screen 2 we get a nice weird little sound effect that leads into a full screen shot of the shit GOING DOWN on screen 3 with a alien invasion -this IS good Zuda pace. You see alien space ships rising up, lifting cars along with them, and our two leads looking on stunned. It's a very impressive screen well layout with striking colors and art. Clay says: "Holy Shit!" and Doc Monster's comment: "Great Scott!". It made me wonder what kind of more true to life language those old Sci-Fi films might have used if the censors would have let them get away with it. Screen 4 reveals some alien insect type monsters that are attacking the kids at the drive-in. It also ends on another cool sound effect leading you to the next screen, which could become a bit of a signature if this comic continues on.

Clay tries shooting the critter, while someone else runs for the exits behind him. The bullets don't work, but Doc Monster shows off his strength by cutting one of the creatures head off. Screen 6 is a nice action scene showing the Doc making a jump for one of the ships supremely confident in his abilities, why Clay wants to call in reinforcements. With all the alien lights shows on display the coloring job could have went horribly wrong -it didn't thanks to David Flora's talent. Screen 7 features a homage to Action Comics #1, and some nice action art as Doc Monster shows off his power. The text/dialogue tells you what you need to know, and the realistic features on the characters helps cut down on the need for all that many words. If anything there is too much background information given on Clay, I could have done with less of that even making allowances for the genre. I also have a general hatred of text box thought balloons, and preferring to let readers fill the blanks. One complaint: the last panel on screen 7 didn't show Clay looking surprised, or even mildly concerned, which didn't match the text. Screen 8 ends with a real cliff hanger worthy of any old time serial. The ship sinks back into the ground leaving a outline that looks a lot like your typical crop circle. To Clay's horror (the text and facial expressions were a perfect match here) Doc Monster hangs on to the ship and disappears below ground as well. Since the narration was a reminiscence of Clay's he reveals things were about to get much worse. This is a excellent Zuda comic I would follow if it won, but it seems to be stuck in the 3rd spot of this competition. I would like to see David Flora continue on with Doc Monster, and give Zuda another go.
If he doesn't manage to pull off the upset after all.
Posted by RKB at 3:54 AM