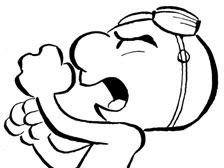 Blitz is another October Zuda comic done by Ted Dawson. Here is the Synopsis: In the days of the Old West, a crippled alien transport made an emergency landing near Alamo, Nevada. Thousands of aliens were assimilated into the United States culture, starting life anew in a strange land. The 20th century would never be the same.
Not all Americans were happy with the integration of Alien-Americans. Some sought to profit by the potential influx of cheap labor and technological knowledge. Yet others had more sinister motives...


Reminding me of Alien nation as a comedy in the old west is a good thing , but the alien looks like one of the Bone cousins -he just does

That's what your going to hear over and over again about the lead space alien, because it's so true. That doesn't mean Ted Dawson decided to just do a crib note version of Jeff Smith, but you can't live in a vacuum and not notice what's came before. The Bone resemblance isn't something that's going away, you just have to sell the story with the rest of the cast/plot. Jeff Smith got there first, so the alien's effectiveness as a character is going to be hampered by that. The creator talked about some confusion with the format which shows in the layout of the screens and pace. The alien shows up in a old west saloon (profiting off the technological knowledge leads to cars on the streets with horses and all kinds of humor possibilities) looking for his "Mudah". The locals at the watering  hole don't like his kind of people around here, and this results in the little alien getting thrown into a pile of dishes. The title character Blitz is the human dish washer who isn't happy with the alien busting up the dishes he was washing. Then his boss come along, see's what has happened, and fires him because it was Blitz's responsibility to take care of them. The art does a good job throughout this comic, and the slapstick jokes come across well. The alien has a few good lines throughout the comic: like saying "playing Frisbee with a gorilla" before going back for a second round with the bully that gave him a toss. The poor layout formatting was obvious on screen 3, a lot of blank black space on the page, which maybe could have been helped by making the panels bigger. On screen 4 we find out Shorty the alien's nemesis is named Bulldog, and he has a sister/love interest for Blitz named Sissie. The dialogue isn't bad, but nothing about it makes it stand out over all the similar comics that have came before. The aliens coming to the states and being treated as second-class citizens did remind me of the Alien Nation movie and dealing with immigration vs. America first'ers. Dealing with the reaction to aliens landing in a cartoon setting, instead of a dramatic film one does have possibilities. The comic didn't focus in on it's best aspect until it's last screen, which hurt it's ability to grab me as a reader. From the art along there are going to be Walt Kelly comparisons made. Pogo tackled real word issues using cartoons to give kids something to look at, adults something to read. Being written well enough to work on a number of levels without hitting people over the head. If Blitz is just a humor strip that's fine, but if you got the set-up to go into Pogo territory -take it.


Why in the world was this comic not in color?

This strip actually did have that coloring book look to it. Most -if not all- weekday newspaper scripts aren't black and white as a artistic choice. It's a financial cost savings decision along with the limits of a printing press. These days with all kinds of color programs making coloring your comics super easy to do, as well as the fact it's going to be a comic on the web -why go with black and white? It doesn't work that often for me on Zuda and it didn't come off well in this comic. Color -even an outrageously garish job of it- would have made this strip look better to me. On screen 5 Shorty the alien bits Bulldog's arm and gets him to drop the gun. Being the old west everyone starts pulling out their guns, and bullets start flying for a big shootout. In a funny repeat Shorty the alien again gets tossed across a room. Blitz pushes Sissie to safety in a nice prelude to a romance. Again the physical humor is done very well throughout this comic. Bulldog tries to 'rescue' his baby sister by holding Blitz upside down by his leg, and the alien saves him with a nice gag. On the way out the door Blitz tells Sissie he'll call her, as he and the alien make tracks.  It is a western comic of sorts, so I was happy to see the creator can draw horses well. I'm not kidding, that's a serious compliment considering some of the comics I've seen on the net. On screen 7 we finally get to the interesting part of the story. The alien is looking for his mother who has disappeared. Blitz informs him of a illegal alien slave trade going on, as Blitz rides off on a horse with the alien holding onto its tail. Bulldog and company let the lead fly while pursuing them in a car. The two escape but the alien finds a paper that says Bulldog is the suspected in the kidnapping of aliens to force them to go to a work camp in Bolivia. Meanwhile Blitz spends the last few panels trying to figure how much Shorty owes him for the broken dishes.No color, and nothing to stand out from so many comics that mine the same territory on the web. Aside from the layout formatting for Zuda issues the art is fine. I hope Ted Dawson gives Zuda another shot with a comic that would stand a better chance of grabbing more Zuda readers.
Posted by RKB at 9:03 PM