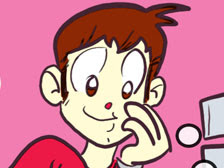 My T-Shirt Fairy Tale was a September Zuda comic done by Adrian Ramos that finished 3rd. Here is the synopsis: U sells t-shirts for a living. Cursed by an evil wizard, the only way to break the spell is to be kissed by the fairest girl. He has settled into a comfortable life as an underpaid and unloved slacker working at his cousin’s t-shirt store, Wits-On-Chest. That’s when he falls for Felix. She is preceded by a reputation of having a fickle heart, breaking young guys’ hearts. They go out, have a great time, and really like each other; possibly even more. There’s a problem, though—she can’t let herself have a happy ending. She too is cursed by an evil witch, doomed to go from one relationship to another. She’ll never be able to find a sweetheart for herself, unless she wants her face to swell up, her skin to breakout and eventually die. Together, they will try to find a way to break the spells that keep them apart, and give this t-shirt fairy tale a happy ending.

Impressive start, but not enough friends to win the vote
My T-Shirt Fairy Tale got off to the early lead, but it couldn't hold on. It also was far more cute than what you would expect to win on Zuda. The art is charming, and fits this type of story well. Having narration sight gags on everyones T-shirt's was also a original touch. All the lettering is legible, and the colors help the art/story. Reading the comic it's told in a style similar to the Teen Titans cartoon. The number of sight gags/backgrounds hi-jinks all work very well. The pace moves along very well for a comic on Zuda, the creator knows he only has 8 screens so no wasting time. The one-two punch of snappy dialogue along with the subtext of a scene being written on the characters shirts was very smart, and funny. You can just enjoy the cuteness, but theirs more to the story if you want to re-read it a few times. Screen 4 is my favorite screen out of the entire comic. You have a eating fries isn't sexy joke, and then panel 5 has a 'sexy lips' panel. You also have to be aware of the various shirts and signs throughout this comic, really read it a couple of times. The way it works the various non-traditional narration don't just apply to the characters, but can also to the readers with 'date tips'. The color scheme also matches what is taken place in the panels.

Win or lose originality, is always welcome on Zuda
You have to love the various narratives, and the way their a part of the story. It doesn't feel forced, and the creator pulls it off too well for it to be gimmicky. At the end of the date U moves in for a kiss from Felix. The timing, and the build up to this were well done, I wanted to click to the next screen to see how bad he would bomb. Theirs a nice visual of U seeing (along with the readers) his life flash before his eyes, because he knows this is a big thing. it ends with 'GAME OVER' wrote in the background as U gets the rejection. All of the different types of lettering, and well done shifts in panel layout does remind me a little of The Spirit. It's not there yet, but give Ramos some years, and it will only get better. Screen 7 serves to remind everyone about the Fairy Tale curse elements of the story, just in case they've gotten lost in all the cuteness. It was a smart thing to have the pages of the book U was reading become part of the larger comic, the colors helped a neat story-telling device give this comic something extra. Screen 8 is some impressive sequential artwork, that sums up Felix's ailment as being allergic to happy endings. U vows to help her, if she'll help him, and that's where the story ends on a good cliff hanger. A very smart, original comic, the subject matter wasn't my thing, but you can't not be impressed Adrian Ramos' work.
Posted by RKB at 1:30 AM