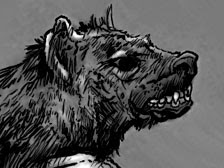 A Stinking Corpse is another August Zuda comic done by Zuda vet Furman. The art is fantastic, I enjoyed the story more than most, and that's why it got a favorite from me. Here is the synopsis: In his mist shrouded past, he fell defending Southern Britannia from the Roman Army... In what passed for Britannia's army, he had raped and pillaged at will, spreading his funky and foul seed from woman to woman with no regrets. Did he die of a sexual disease or had age slowed him down to fall under the stroke of a short sword? Perhaps both. He died (that at least we know) for five days and then was born again, as A Stinking Corpse'. Cursed by the goddess who resurrected him, to wander the land until the day he found a woman to love him, despite his grotesque form. He is now driven to right the wrongs he had done in life, until that day when he finds true love...

Hyper-realism in a fantasy/horror comic kicks the shit out of just about everything else
I loved all of the details in the art that assault a readers eyes in this comic. The photo-realistic thing isn't for everyone, but the art worked as the opposite of reader expectations -the anti-Sláine considering the story setting. The synopsis sounds like ad copy for a grind house film and the opening screen of the comic is a massive brawl with wolf-men. Furman doesn't get the writing credit he deserves with this comic. I noticed all the text box thought balloons which put me on my guard, turns out Furman came up with some fine crafted wordage to fill them. Their were a few issues with pacing/sequence that hit early on. On screen 2 Furman tried to chop up one larger picture into three panels to show the passage of time. It's a good old trick, but it wasn't quite pulled off because the panel gutters were two slim. It made the page look weird and distracted this reader out of the story. "The scent of blood and love sacrificed had drawn me here from many miles away. I thirst for those things as a living corpse, especially in combination." I thought those were some fantastic lines in the comic, maybe not for everyone, but I thought it was great. Screen 3 is a busy screen with a lot going on to take in. It also shows a acceptance on Zuda's part for more violence (yippee human sacrifice) and nudity (look at the poor dead girls asses) in their submissions. I think a lot of creators struggle with trying to pull off one of two main options in their art: The first is to do things just enough that folks get the idea -but no more. A surgeon's style soft touch that opens viewers/readers eyes up to what's really going on in a story slowly. It also sets the limit on just how bad (for the characters) things can get. The other approach is to burn reader's eyes out of their fucking skull. Meaning the narrative choices do hit you right between the eyes, and a reader realizes quickly any/every character can die -horribly. The amazing visual assault in this comic's screens let you know Furman isn't easing readers into anything. You don't have to have a appreciation of Eli Roth/Rob Zombie to enjoy this comic -but it helps. Clunky dialogue is a problem that comes up for everyone A Stinking Corpse is no exception. "Ancient one, I have called you by right of blood sacrifice." [that part's good it sets up the conflict well] "My own daughters cut, their flesh peeled back to gain your favor." [that dialogue sounds tortured why cut instead of dead? We see a sword in hand the method of their death is pretty obvious.] Screen 5 is back to well written words, and in your face art. A depiction of the dead daughters with blood, hair, and choice camera angles doing the nipple obscuring. Cutting out the eyes to bind the Corpse sort of brings home my point about the art not playing coy. A problem throughout this comic is panel gutters too small, with the detail involved you'd want readers to savor it, those skinny panel borders are a subconscious clue to speed read. Screen 6 had some good dialogue in some funky panel balloons, but the sequence of shots (we are exposed... cue the dead daughters), and the explanation of the ritual was very well done.

A Stinking Corpse is a accurate but completely unappealing name, which doesn't do this fine read justice
The punch line at the end of this comic was well set up, and pretty damn funny considering the subject matter. In screen 7 The Druid goes to command the Corpse, and the Corpse refuses him. Needless to say since he had just sacrificed his two daughters the Druid is more than a little put out over this. As it turns out the Corpse was just fucking with him. Of course once the Druid realizes this he swears to get his revenge on the Corpse after his job is done. The Corpse then sets out to slay the Druid's invader enemies and leaves with these words: "Damn Druids, no sense of humor." That last line has got some critical comments saying the Corpse's dialogue was too modern. It's a fair point. If the twist at the end is the Corpse survives into modern times and is just retelling the story in current vernacular the Corpse picked up it makes sense and is cool. If the Corpse is just a product of his times some dialogue tweaking to make his speech more archaic would be in order. The gray scale color choice fits this comic very appropriately. Art amazing, and words better than Furman has been given credit for. A Stinking Corpse was the comic with the second worst title in Zuda this month, and my second favorite read. Sooner, or later Furman will win at Zuda his submissions keep improving in quality. As far as A Stinking Corpse goes try a submission to Heavy Metal. I would much rather read this comic (with a new title) than Carl the cat that makes peanut butter sandwiches in that magazine.
Posted by RKB at 1:37 PM