Zuda review The Adventures of Mr. Simian/ Stop me if you've heard this one before: A monkey and a talking rat escape from a lab... 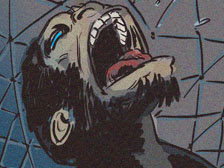 The Adventures of Mr. Simian is another Zuda comic this month done by Zuda vet John Bivens. The contest is over, but my reviews aren't. A monkey and talking mouse is a nice buddy on the run set-up, but more poop slanging would have been appreciated, Here is the synopsis: A very clever chimp and a loud-mouthed mouse (yes he talks) escape from an animal testing facility, only to end up chased by inept lab assistants. A poop and science filled buddy comic that takes our protagonists on adventures around the globe.

More poop slanging please! -or not?
The creator has admitted starting at the beginning may not have been the best choice. I think the starting point is fine, but more of a poop slanging frenzy for the finale would have been more grabbing to readers. What would have been even better is no poop slanging at all. It starts with Mr. Simian in a cage in a lab, and you can figure on some sad moments ahead. The text narration is just enough to aid the fantastic art, but not take up too much space. As Bivens is a Zuda vet it shows that he has been in Zuda before in the professionalism of this entry. Having the title character not be able to talk, means the artist has to be fantastic at facial expressions -which John Bivens is. The lab doctors could look more crazy, spooky, or kooky depending on the planned direction for this comic. On screen 3 however, you have an extreme close-up of Mr. Simian's face with a single tear and the caption: "I wish I could say that he wasn't afraid." That's great characterization, and reader grabbing storytelling. Screen 4 is amazing in it's non-traditional layout. A series of images on one screen tells you everything you want to know about the torture Mr. Simian went through. Scenes of being drugged, his brain being exposed, screaming in pain, hooked up to what looks like an electric chair, and the closing shot Mr. Simian curled up into a fetal position. Doesn't sound much like a on the road buddy comedy so far does it? Screen 5 we finally see the talking mouse and he's stolen a key for a jail break. The mouse mentions he's been getting the same injections as Mr. Simian so that could explain his greater intelligence. His ability to talk is a experiment to give him 'human-like' vocal chords, and makes for a awesome character. Really great character designs on the main two that come across in this Zuda submission. The colors remind me of Lynn Varley and make the story even better. Letters and thought balloon gags are completely legible.

It should be more Thelma and Louise, or Life is Beautiful -than National Lampoon
Our heroes make their escapes from their cages and do some monkey-wrenching on the way out their door. Unfortunately around screen 7 is when the Keith Giffen influence (I'm guessing) played hell with the tone of the story. You have the lab doctors wondering what happened, and wanting to recapture the experiments. Then it screen 8 you have the chimp poop thrown complete with a Giffen style arrow. Then Mr. Simian and Algernon's foul mouthed twin, ride off in a hover car like Nick Fury used to have. We get a last 'funny' portrait panel of the chief villain saying "get them back or don't show your faces around here again". WTF just happened??? The whole theme/tone/mood -feel- of the story just did a 180 on the last screen. The genre tags chosen by the creator are: Science Fiction (with the lab experiments sure), and Comedy. Screens 1 through 6 could be horror, other, action/adventure -one thing they aren't is comedy. If John wanted to go the 'poop that's in my hand' route the earlier screens should have been less serious, sad, and touching. They made it seem like a horror, or action story. I read the synopsis and comic information first so I was surprised at the initial tone of the screens. It's possible John wanted to do something that showed even in the worst of times you have to find something to laugh about to keep your spirits up. That kind of story can have a lot of appeal (award winning even), but you can't wait till the last screens to set the mood. If that was a goal the pacing was awful for it. If it is supposed to be a buddy movie type comic, then the sad origin's should have been left to flashbacks at a later date. A serious story that was really grabbing is what I was reading until page 8, and it went of the rails. As a neat twist on the Thelma and Louise/Bonnie and Clyde outlaws on the run story it's great, as the comedy it was intended to be -not enough smiles and poopage to pull it off.
Posted by RKB at 11:41 PM