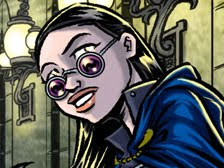 Impure Blood is another October Zuda contestant done by  Nathan Lueth and Nadja Baer. Here is the synopsis: Dubbed the "Abomination" because of his appearance, Roan carries within his human body the Blood of a mystical and nearly extinct race known as the Ancients. Blood, which manifests itself in exceptional strength and physical mutation. Blood that earned him imprisonment in the Veresta Stadium, where pure-blooded humans force him to fight in gladiatorial games.
Nearly broken, Roan jumps at the prospect of freedom when a mysterious girl named Dara appears at his cell. She offers him a chance at a new life in exchange for his help, but refuses to release him until he binds himself to her mission with a sacred oath known only by the Ancients.
Tied to Dara by words as old as his Blood, Roan has no choice but to join her and her cohorts on a quest to track down an Ancient artifact. Dara is desperate to find it, believing that it will unlock the mystery of her own past. Elnor, her bodyguard, is sworn to protect Dara by a contract, but her true desire is to keep herself safe, even at Dara's expense. Caspian is a member of a secret society sworn to conceal the Ancient artifact and keep it out of the hands of those with Ancient Blood.
Roan cares only for his freedom until a new player joins the game and threatens the very existence of humanity. Now Roan must make a choice: Overcome  a lifetime of humiliation, repression and rage, and protect  the people that imprisoned him, or walk away and allow humanity to suffer the consequences of its mission to suppress the Ancient Blood.

It says it's an action/adventure, and you get an action/adventure from panel 1, screen 1. The first panel is of a guy getting his head busted in, with a suitable amount of blood flying. The font is legible. The colors are well done. It's a fast moving Zuda story that ends with a good cliff hanger. The is a lot of action the artist does a mostly fine job of  rendering on the screens. There are no stiff looking combat scenes, all the characters look fluid.  Screen one we see Roan the Abomination fighting it out in a gladiatorial contest, with a streak of humor running throughout the comic. I give the creators credit screen one lays the ground work for the tone of the whole comic.On screen one you can read the arena announcements about the abomination: "The Veresta Keepers would like to remind you that all bets are final. Defaulters will be put in the ring to face the abomination next week." The humor lessons the impact of all the blood flying, and makes this more of a adventure story. Screen 2 has a nice layout in the actions scenes as Roan dispatches his opponents.  Screen 3 pulls away from the conflict to start establishing the plot. A mysterious benefactor sends his two associate hench-women to go break out Roan, complete with a strange message in a watch: "we know where it is." The suspense isn't enough to rip your spine out, but the story is moving along across the 8 screens. Roan goes up against  someone with a robot knife-arm, for the sole purpose of ripping it off and stabbing him with it in a cool action scene. The Manga style action panels do work to make the fight scenes have more impact, with a nice contrast to the standard layout for non-action scenes. The last panel on screen 4 is a nice piece of work showing Roan holding his wounded arm, face hidden in shadow.

On screen 5 in the background there is a plaque that throws in the lawyer joke, along with one of the hench-women ( Elnor) distracting two guards with her allures, while the other (Dara) goes to break out Roan. Roan gets some very good dialogue as at firsts he's amused by this young woman, but then gets drawn into making a deal for his freedom. This scene also brings up one of the problems I have with this comic, Roan just doesn't look scary enough. If he's bashing in skulls, or trying to look stoic in solitude he comes off impressive as a Shriek plushie. Maybe going the Judge Dredd route and giving him a mask so readers can't see his face would have been a better option. It doesn't seem the mix of humor to action is quite right. On screen 6 Dara asks Roan to swear a oath: "To the beginning of the blood..?", and Roan questions how she knows about the sacred oath of his people. Screen 6 does have some impressive panel layouts in how this scene plays out.  There is a shot of Roan's hands holding the bars as he thinks over the offer, then his face in shadow again as he swears: "To the begining of the blood." She reveals her name, he tells her her name, and they start to make their escape. The whisper word balloons in this comic are done in pale gray. The backgrounds showing in arean are very well done, and screen 7 had a nice 'puzzle piece' layout. Screen 8 Roan and Dara make it out to find Elnor has drugged both guards. Dara and Roan reveal the only way he can have his freedom  is to get past the gates by sunrise. The last panel reveals the trio making a run for it, it was a good cliff hanger. It's a good comic, but I couldn't tell if it was a action/comedy, or a action comic with some light moments. I more bad-ass scary Roan would have also had more of a impact.
Posted by RKB at 10:25 PM